Our Pet Cube 2 has arrived and is activated. Love that I can monitor my dog when I am not home.I only have good things to say about this device....*Easy to install just download the app and follow instructions.*Compact unit so it can be placed easily.*fast delivery* compact packaging*great picture clarity*wide range of viewLove that I can see what she is doing for my peace of mind. Interactive too as I can also talk to her and laser play with her. 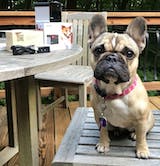 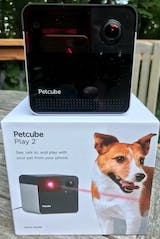 T
ToughpuddleToughpuddle
I wish I had bought it sooner!

As someone who works in the medical field this is perfect for checking in and playing with your pet on those long shifts at the hospital.Video Quality:The video quality is good enough to see everything in view and the wide angle covers my entire apartment. I've included a pair of photos to demonstrate the quality and the scope it covers. The plant in the foreground is there for reference as it is about a meter tall. The quality isn't exactly 4k but 1080p works well enough for our needs. My fiancé and I can clearly see where our cat is throughout the day providing us with a sense of relief. The camera has the ability to screenshot pictures or record video while you are using it, which is nice to share funny moments of playing with the laser pointer. You do have to pay for the subscription to save video automatically when you're not actively viewing the camera, which is a downside, but the option is there for an additional cost.Laser pointer:I was most impressed with the laser pointer function. I really thought the laser pointer would be sub-par, stutter around, and difficult to control but I was wrong. After calibrating the laser to your room, the laser smoothly drags across the room as you move your finger. I've had no trouble on breaks playing with my catEase of use/setup/security:Setting up the camera is very easy and the app walks you through it step by step. I've yet to encounter any issues connecting to the device remotely and have had no problem walking my family members through the process of accessing the camera. The biggest selling point for myself is the security and encryption PetCube provides. I wouldn't want a no-name competitor camera in my household, especially one that can show not only my pet but what I'm doing as well. With their rigorous encryption standards I have no worries that anyone is hacking into my camera.At first I was skeptical of this device and the cost compared to other pet cameras on . But after using the device, you'll understand its worth it. The quality/view of the camera, the extremely easy to use laser pointer, and the top notch privacy features make this a must buy and I only wish I had bought it earlier.

Right after delivery we unpacked Petcube with my cat. He was interested into it and sniffed each part of this new device. Setup process was very easy, scanned QR code, installed app and signed up a few minutes. We use Echo and were glad that Alexa integrated with Petcubeso we can send command to Petcube. I've read that I can tell command like "Alexa ask Petcube I play with my pet for 5 minutes" and game should start, but Alexa told that she doesn't know the command. Later I've found that I need to add new skill to Alexa, through its menu. It's good to have detailed information about that in user help. We very liked night vision camera, because we can play with cat when he walks in another room. Automatic move detection works well, but game start only for few minutes, if we use Alexa we can set how along should Petcube play with cat. The fun thing is that we can call cat to come to Petcube by command "Kitty kitty". At the moment I didn't find another way to start autoplaying with cat except sending command to Alexa, it would be good to see such option directly in Petcube app. One more thing is when Petcube started autoplay after move detection Alexa can't find Petcube in list of my devices so I you can't send command. When we were out of home and had some time we used to call to cat to play with him, manual mode works smoothly, we don't need to keep finger on phone screen, just tapping on certain parts of the screen and laser point moves from one spot to another fluently.Pros:- easy setup- night vision camera- autoplay after move detection- integration with Alexa- smooth moves of laser pointerCons:- unable to start autoplay from the app- movement detection notifications didn't work with app.

I've been using the previous version of this camera for quite a while. When this new one came out I decided to try it for our summer house. We go biking (or skiing in winter) and our dog stays home quite a bit... So a little entertainment is always great. The new cam works just fine. Built quality seems to be good. Set up was easy and fast, and now both cameras show up in my app on the phone. Laser is much more precise in this version. Highly recommend as a pet cam, or basically any home camera needs.

Pretty convenient at first, but my 7 month old kitten is bored of the toy now and doesn’t engage with it. Alexa is also pretty spotty and I have to constantly restart the petcube. I def wish I could return it and buy a cheap video cam and give my kitten the box it comes in since he seems to have more fun with a box.UPDATED REVIEW:Petcube’s customer service is incredible. They were incredibly patient with my frustration at having to constantly restart the device and even sent me a replacement and the device has been working as expected without any issues =]Thank you so much to the team at petcube & especially Marina!